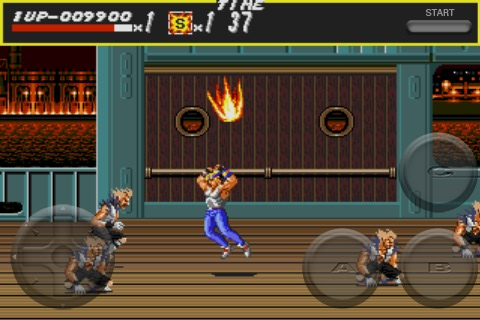 If you’re an old-school gamer, you might remember the 16-bit game era where Super Nintendo and SEGA Genesis were the only two home consoles of choice.  The battle between the two consoles was fierce, and to this day, a victor has yet to be decided as to who had the better console, Nintendo or SEGA.

During that time, SEGA released a side-scrolling beat-em-up in 1991 called ‘Streets of Rage’.  It was one of the console’s best games as there weren’t many beat-em-ups with the amount of detail and overall fun in the home console market.  Thanks to SEGA, iPhone users can now experience the good ole 16-bit days as they released Streets of Rage on the Apple App Store for $4.99.

Streets of Rage on the iPhone features the same graphics, characters, and fight moves that we all remember.  As you see from the screenshots, the game features on-screen controls that either go over the action, or you can zoom-out and have the controls underneath the screen.

Apparently the next generation of iPod Touch will be picking up some of the features of its big brother, the...