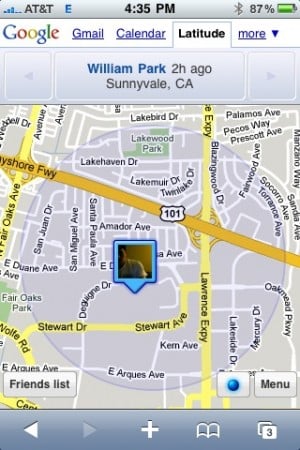 Google Latitude for iPhone is finally here! The sorta-creepy, friend-tracking service from Google has finally hit the iPhone. Sure, BlackBerry and Android users have been playing with the Google Latitude service for eons already, but, like they say, better late than never. Google’s fashionably-late entrance to the iPhone party gives iPhone users the ability to keep tabs on where your friends are hanging out (as long as they have the service running and actually allow you to track them). More importantly, the Google Latitude for iPhone launch gives us a glimpse into Google’s future plans for smartphone apps.

Google’s Latitude for iPhone has been launched as a browser-based web application (web-app). Both the BlackBerry and Android platforms enjoy stand-alone Google Latitude applications on their respective smartphones. Now, Google could have developed a Google Latitude iPhone app, but decided to make a web-app that only works in the iPhone Safari browser. Why is this important? Because, as Google’s Vic Gundotra said at MobileBeat 2009, Google’s betting that the future of mobile application is the web-app. There will always be a need for more powerful native smartphone apps, but most mobile apps will move to the “cloud.” Gundotra even mentioned that Apple had it right when they first pushed to make web-apps the standard for iPhone applications, but Apple was just too ahead of its time.

By releasing Google Latitude for iPhone as a web-app, Google has effectively bypassed one of the iPhone’s strongest features – the iPhone AppStore. Apple makes a veritable shit-ton of money from the AppStore, and Google has shown that even complex services like Latitude can work as web-apps. They’ve shown that mobile app developers don’t need the AppStore, or any other applications store. In fact, Apple made it easy for Google to straight up side-step the AppStore by releasing iPhone APIs that allow web services to tap into iPhone hardware.

Apple simply can’t be touched when it comes to the AppStore. Everyone and their grandmother has an applications store. Granted, most of them will fail over the next couple years, but there’s no shortage of companies trying to take a small slice of Apple’s pie. Google isn’t going to even compete on that level. They’re banking on cloud-based services and apps. If anybody knows the cloud-based services market, it’s Google. They probably already have a plan for taking over the mobile computing space and crushing Apple’s AppStore to smithereens. After all, Google has been working on cloud-based services for longer than I’ve been paying for my own internet bill.

AT&T really needs the iPhone, but the iPhone doesn't need AT&T. That little fact alone is probably enough to give...