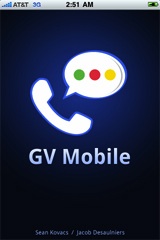 Almost as soon as Apple pulled the third-party Google Voice iPhone app GV Voice from the AppStore, the app shows up in the jailbreak scene. Today, Sean Kovacs gives Apple the mighty “finger” by releasing GV Mobile as a jailbreak application through Cydia.

For those of you still not familiar with the the iPhone hacking scene, the “jailbreak” refers to an iPhone hack that allows users to install unofficial third party apps (by opening up the iPhone’s file system to third parties). The iPhone jailbreak dates back to the days before the AppStore, when “Installer” served as a makeshift applications store for cutting edge iPhone users (Installer has since been replaced by Cydia). Today, Cydia serves as the de facto application repository for rogue iPhone apps that Apple has deemed unworthy of, or otherwise prohibited from, the AppStore.

So, now that GV Mobile has been relegated to the ranks of bastardized iPhone apps, GV Mobile has popped up in Cydia. Screw the AppStore, if GV Mobile is high on your list of gotta-have iPhone apps, Cydia is where you want to be. Simply fire up the Cydia app and search for “GV Mobile” by Sean Kovacs. Once downloaded and installed, GV Mobile’s jailbreak application works just like it did when it was available on the AppStore.

All you Google Voice fans have a new reason to jailbreak your iPhone, iPhone 3G or iPhone 3GS – hit up our iPhone 3GS jailbreak guide to find out how. Or, you might want to just wait for the web-app version that Kovacs is currently developing.

Not a huge surprise here, as Simon reported the rumor to us a little while ago... But it's always nice...