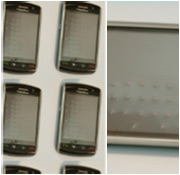 Just received an email from the folks at Smartest Cover. They’ve released a brand-new product that lets you ‘feel’ the keyboard of your device… in their first kick at the can, they’ve released a cover for the BlackBerry Storm! The patented technology places tactile markings over corresponding letters on your Storm’s virtual keyboard. Two versions are available, a ‘Landscape’ and ‘SureType’ version.

At the moment the Storm SmartCovers are available for $13.99 for a package of 3. Also worth noting, a new version for the iPhone 3G is coming out in the near future. I sure hope it’s compatible with the 3GS as well?

At any rate, enough talk, check it out for yourself over at smartestcover.com.

The next version of BlackBerry's on-device application store, App World, has been promising most notably a launch across much of...