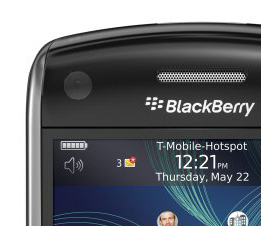 While video conferencing isn’t what you’d call a popular mobile activity, the supporting hardware is something we’ve been seeing in smartphones for years now, and it looks like RIM is deciding to catch up. According to a conversation with an anonymous RIM executive at the Brainstorm: Tech conference, the first BlackBerry with a forward-facing conference camera will be making its way out in early 2010. Lack of concrete proof aside, it certainly sounds viable, and having at least one product with video conferencing capabilities would fill the demand (however small it may be). Is anyone seriously hurting for a feature like this?

The Samsung U960 first spotted in a leaked roadmap for Verizon not too long ago, and now we've got some...