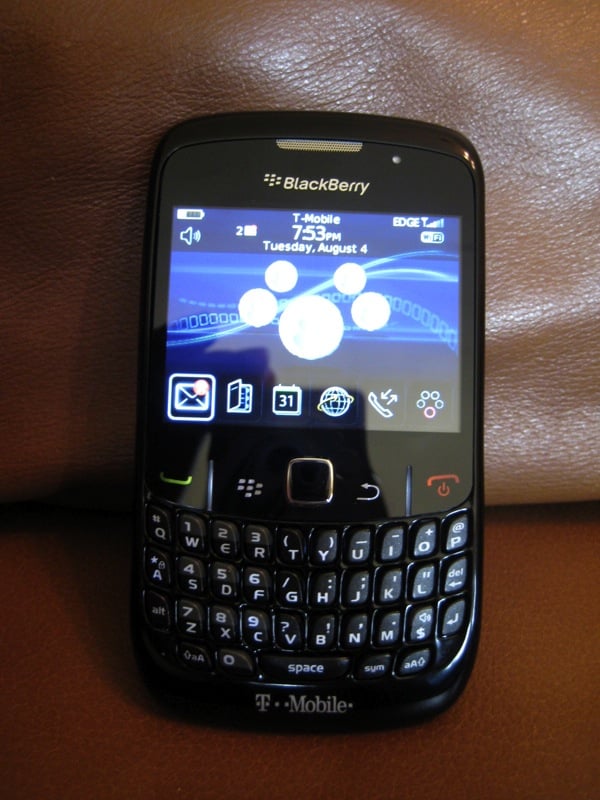 RIM invited me to hang out with them at the lovely Bryant Park Hotel Cellar Bar in New York City to get a first hand look at their upcoming BlackBerry Curve 8520.  Not only was I able to talk about the 8520 with them one-on-one, but they even allowed me to bring one home with me to poke and prod to my heart’s content!

When I first got my hands on the Curve 8520, I was surprised by how light the device was.  The last BlackBerry I owned was the good ole 8700g, so to go from that phone however many years ago it was that I had it, to this one is a huge step forward.  One of the things RIM wanted to put a lot of effort towards was the 8520’s sleek and streamlined design.  RIM did a great job with that as the 8520 doesn’t feel clunky in the hand.  The 8520 also has small buttons on the right and left side of the device.  The left has one, which by default launches voice command.  The right has three: The first two are for volume control, while the third is towards the middle and by default launches the camera program.

The optical trackpad on the 8520 is also something that should be pointed out.  When you navigate through the menus using it, it’s rather impressive on how smoothly the 8520 navigates.  It’s especially apparent when you’re navigating through the web browser.  Rolling your thumb over the optical trackpad puts less wear and tear on your thumb, especially when you’re scrolling down at a fast pace in order to get to a lower part of the webpage.

And finally, let’s talk about the integrated media buttons located at the top of the 8520.  The placement of these controls were perfect as most people have their phones located towards their hip.  All you have to do to control your music is touch the top of the 8520 and you can easily pause, skip forward or backward while you’re listening to your favorite tunes.  I did notice that the buttons needed a bit of force in order to click the buttons in.  I guess the purpose of this is so users don’t inadvertently bump into something and accidentally switching tracks, but unfortunately it still needs you to have finger muscles of steel in order to use them.

That’s all that we’ll give you for now.  We’ll be working on the review for the BlackBerry Curve 8520, so make sure to check back to IntoMobile to read our full review!

According to IDC Research, the BlackBerry Curve is the head honcho when it comes to U.S. smartphone sales in the...