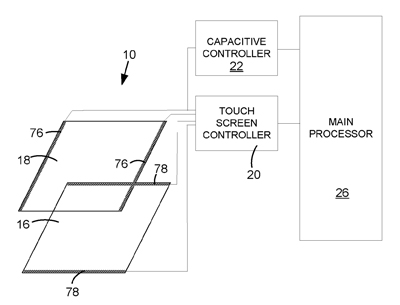 RIM has filed for a particularly imaginative patent that merges the responsiveness of a capacitive screen and the precision resistive touchscreens. The hybrid system, dubbed appropriately (and cryptically) “electronic device and touch screen display” is described as:

It seems like BlackBerry already has its hands full trying to make SurePress work, let alone putting another layer of responsiveness, although it’s entirely possible something like this could replace SurePress in the long run; having to press down on a resistive screen would certainly take less work then pressing a single giant button, and potentially be more accurate. That’s mostly daydreaming, since the bulk fo patent filings never get fully implemented, but generally provide interesting food for thought. Take a look at the entire patent filing for more information.

HTC Diamond Theme for the BlackBerry Bold and Curve 8900

Want to turn your BlackBerry Curve 8900 or Bold 9000 into an HTC Diamond themed device? Okee-dokee then, I've got...