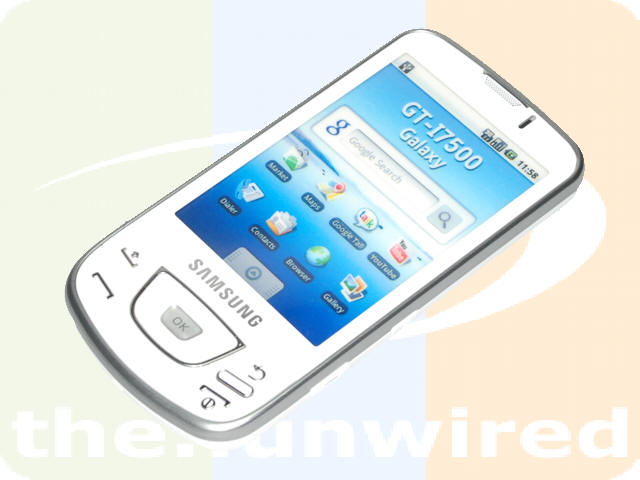 The Samsung Galaxy GT-I7500 is Samsung’s first Android smartphone. As such, it would be a shame to see the Galaxy coming to market in just a single shade of Black. It would be, that is, if these new spy pics didn’t confirm the existence of the White Samsung Galaxy. What you see here are real-life images of a Samsung Galaxy clad in White, not the rumored Samsung Galaxy Lite. The fair-hued Galaxy will sport the same spec-sheet as the Black Samsung Galaxy – 3.2-inch AMOLED touchscreen, 5-megapixel camera, Bluetotoh 2.0 + EDR, WiFi, 3G data, GPS and a 3.5mm headphone jack.

Thanks to theunwired, we now know that the White Samsung Galaxy will bring its Android goodness to Europe later this Summer. O2 will apparently be the first to get the White variant, with other European carriers to follow.

The Samsung Galaxy’s tri-band 3G (900/1700/2100Mhz) radio makes it a good fit for T-Mobile USA’s AWS 3G network (which runs on the 1700Mhz frequency band). It’s probably only a matter of time before T-Mo USA launches the Galaxy… it is cleared by the FCC after all.

RIM invited me to hang out with them at the lovely Bryant Park Hotel Cellar Bar in New York City...