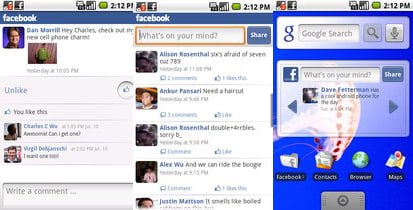 While the official word on the matter is… well, actually, there is no official word on the Android Facebook app. There’s a web-app, but Android users still don’t have a native Android Facebook app to play with. But, thanks to a newly leaked set of screenshots, there’s little doubt that Facebook is indeed working on an Android port for its mobile application. The screenshots show a very Facebook-esque interface, with one screenshot showing what looks to be an Android homescreen widget for posting Facebook updates.

Android is gaining steam, so it’s not surprising that Facebook has apparently decided to get over whatever beef they had with Google and bring a Facebook app to Android users. It’s only a matter of time. Hopefully not too much time.

"Crowd-sourcing" might be the latest catch-phrase in mobile tech, but that doesn't mean it can't be awesomely super-cool. The term...