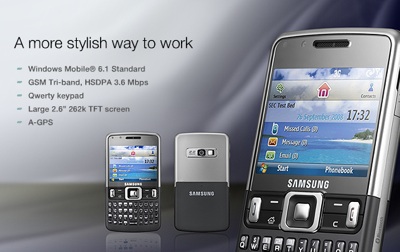 In the post the other day, I received a Samsung C6625v – which is a QWERTY candybar form-factor device, running WinMo 6.1. The sales proposition behind it is that it’s a value solution for the Mobile workforce, and packs a reasonable array of features – the key one obviously being push email, natively supported by WinMo and a paired Exchange server. So we are not expecting bleeding edge in terms of hardware, but still something that is a solid punt in to the mid-range enterprise market. I should probably also say at this point that this particular device comes as a package with Vodafone – but you can read more about that here.

First of all, before I get in to things, let’s hear more of the official word on the device/solution:

The Samsung C6625v on Vodafone’s Outlook Mobile tariff is a great option for those who need to mobilise their staff members whilst keeping costs down.  Starting at £7.50 per user per month, using an existing Microsoft Exchange Server setup and working hand-in-hand with Windows, it’s a very cost-effective package for businesses.

As you probably know, Windows Mobile gives you access to Outlook tools – mail, calendar and address book – as well as the ability to review and edit Word, Excel and Powerpoint files on the go. The Samsung C6625v is a 3.5G device with a QWERTY keyboard, A-GPS and a large 2.6” screen.

The combined feature set of Windows Mobile and the Samsung C6625v – with the very low running costs – compare really well with the other mobile solutions available.

Let’s take the hardware first. Samsung are known for doing a good job on their devices hardware-wise, be they high-end, or even budget. The screens are always good, and likewise keypads. I’ve seen in the past some devices with less than great battery life, but I’m happy to report it’s pretty good on this one – thanks in no small part to the 1300mAh battery.

In terms of general look ‘n’ feel ‘n’ touch of the device, it’s great – really nicely weighted, well put together, and importantly for mobile emailing, the keys have good responsiveness and are well-spaced. Each of the feature buttons are well-placed too, so you can make/take calls without worrying you are hitting another random key and accidentally conferencing your mum in!

Now you might think some of the above features are basic, but I liken this to the ruggedized devices that we report on – it has to be (very) good at a couple of things, and then after the rest of the features come a distant second. Clearly here it’s utility for the mobile worker that is key, with fast data connections, mapping (utilising the GPS), and long battery life. But enough of hardware (which I really rate), and something about the software.

Software-wise, I’m upset. WinMo 6.1 does look very archaic compared to the likes of the HTC Hero, Apple iPhone 3GS, but worse than that it’s REALLY slow. I am going to create a video package which will be posted up soon, to show you just how slow. This is a real disappointment, because one of the things a mobile worker will expect is to get on with their job – not wait for the OS and applications to catch up!

This could have been a stunningly good handset for the market segment it’s trying to address – instead we’ve got fantastic hardware, and really quite slow software (O/S). What Samsung might have been better off doing is sticking their own O/S in there, and seeing if they could license the exchange integration from Microsoft.

Actually, as a general point, I’m quite worried about WinMo – I recently tried the Toshiba TG01, and that ran slowly too – despite having the Snapdragon 1GHz processor in it – what does it take to get WinMo to run without lagging?!

Coming back to the C6625v, I guess as a basic solution for email for a mobile workforce it will be OK – but the dated and laggy O/S would I am sure mean that it isn’t such a joy to use – a real shame, as I like the hardware a great deal.

You can read more about the device and the Vodafone Outlook Mobile tariff here.

Sometimes, you just have to be impressed with a bit of mobile tech when it is put in front of...