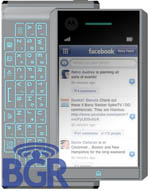 To go along with the latest round of specs for the Motorola Morrison, we’ve also learned that ‘Hello Moto’ is building a custom user-interface for Android. Seems to be the ‘thing to do’ when developing/building for Android these days. The HTC Hero has ‘Sense’ UI, the upcoming Sony Ericsson XPERIA boasts a custom ‘Rachael’ UI, and now, this. Here is what we know about the custom UI for the Morrison, via BGR:

It will combine all personal contacts and social networking sites into a clean and easy to use interface…The skin/OS is named “Blur” by Motorola and will be heavily web-connected. All Android devices will be able to upgrade different sections of the OS and interface all over the air.

Surely that leaves quite a bit to the imagination, but it’s cool to know that something is being worked on. Best of luck to Motorola as they work this one out. I’m expecting big things (no pressure).

In an interview with Reuters last week, Andy Rubin, the main man at Google behind Android, said the company is...