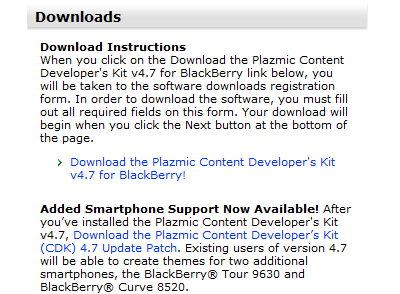 Hey BlackBerry Theme developers, have some great news for ya. You were probably waiting for Plazmic to update to include the latest Berry models, the Tour 9630 and Curve 8520. Well, thankfully, the folks at Plazmic have been busy and the update is here! That’s right, the Plazmic Content Developer’s Kit 4.7 has been released, and it has support for the 9630 and 8520.

Not much else to say here… So if you want the latest version of Plazmic with new device support, you can go ahead and download the CDK from Plazmic right here. Let the Tour and 8520 ‘theme race’ begin 🙂

Time to take a break from our regularly scheduled postings to let you know about the latest BlackBerry OS update....