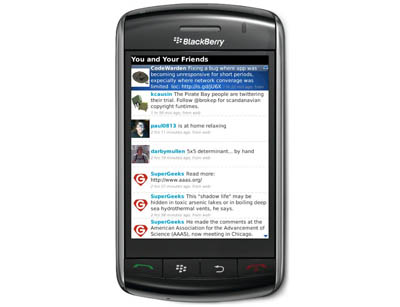 UberTwitter has gone live with the Beta 4 version of their app. Much to the shagrin of many users, the initial release of Beta 4 had built-in ad support. Perhaps one of the biggest complaints surrounding previous versions was just that, the nagging and intrusive ads. Well, after enough complaints from their valued users, UberTwitter has decided to turn ads off in Beta 4. A quote from this morning:

We will be turning the ads in UberTwitter off until we can offer an ad-free option, we have heard you all loud and clear! Ads are now off, select ‘exit’, then re-enter uber, it will retrv one more ad, then that will be it.

I call that listening to your audience. For a full list of what’s new in UberTwitter Beta 4, make the jump. Otherwise, you can download the latest version from UberTwitter.

Hey BlackBerry Theme developers, have some great news for ya. You were probably waiting for Plazmic to update to include...