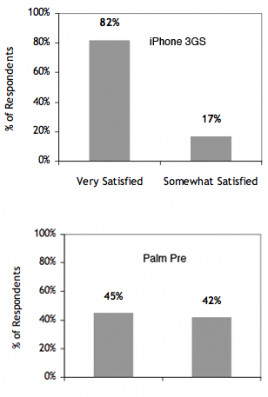 Does your phone leave you happy? More importantly, does it leave you satisfied? It doesn’t matter what kind of glitzy marketing campaign is behind your phone. It doesn’t matter if your phone can wash the dishes for you. What matters is that you, the consumer, are happy with your mobile phone. And, when it comes to customer satisfaction, a new survey from ChangeWave Research and RBC Capital shows that the 99% of Apple iPhone 3GS at satisfied with their phone. Of those iPhone 3GS users, a solid 82% are “very” satisfied. Compared to the Palm Pre’s 87% general satisfaction and 45% “very” satisfied rating, it’s clear that the iPhone is still king in the US. Interestingly, just about every single iPhone 3GS user is satisfied with their Apple smartphone, despite having voted AT&T’s network as the top-ranked “dislike.”

The charts below explain in more detail what iPhone 3GS users liked and disliked about the handset. The top “likes” for the iPhone 3GS were the Touch Screen Interface and the iPhone OS’s Ease of Use. The top “dislikes” were, unsurprisingly, AT&T’s Network and the iPhone’s Short Battery Life. It seems not even AT&T’s unreliable network is enough to keep people from using the iPhone 3GS. 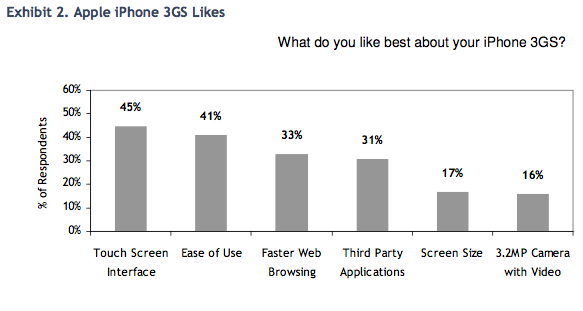 For the Palm Pre, users most liked the smartphone’s Touch Screen Interface and Muti-Tasking abilities. Unfortunately, the Palm Pre’s Short Battery Life and lack of Third Party Apps kept the Palm handset from leaving more than 45% of users “very” satisfied. Still, the Palm Pre’s satisfaction ratings were “the highest score ever recorded in our prior Palm satisfaction surveys and above all other manufacturers except RIM (48%) and Apple (82%).”

The moral of this story survey? The Palm Pre is one of this year’s most satisfying smartphones. The Palm Pre has been a fantastic success for Palm. But, Palm is going to have to work a lot harder to best Apple’s iPhone.

Just yesterday we reported on a rumor from the China Business News that China's stat-owned wireless carrier had purchased 5...