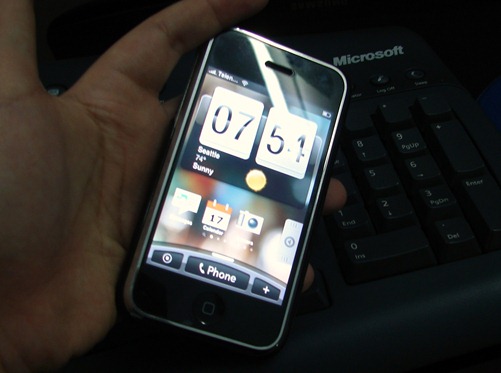 Fancy yourself playing with the HTC Sense UI, but can’t bear to part with your iPhone? Well, you’re in luck. The Sense UI is now available on the iPhone as a custom-made theme!

While the likes of T-Mobile myTouch 3G users will probably never get to use the widget-friendly Sense UI (licensing restrictions being what they are), the unlikeliest of smartphones has been blessed with this year’s most intriguing UI. To be fair, though, the Sense UI hasn’t been ported to the iPhone per se. Instead, the iPhone OS homescreen can be modified to look and work just like HTC’s own Android interface.

In order to get the Sense-like theme onto your iPhone, you’ll have to jailbreak the handset and install a few apps through Cydia. Redmond Pie‘s tutorial will guide you through a step-by-step process for getting the Androidy Sense UI onto your iPhone.

Check out the video below, if you like what you see, head on over to Redmond Pie for the DIY guide.

As the Android OS continues to evolve and take on new features, Android smartphones around the world will continue to...