A photo from an unnamed retailer was published to Flickr and Mark from The Nokia Blog was there to snag it. Unfortunately, the owner of said photo made Mark and Engadget remove his fuck up. Thanks to the internet however, that photo will never die! As you can see below, there are a lot of devices. The top three, from left to right, appear to be the Surge, 6303 and 6700 Classic. The next row has the Nokia N97, an unknown full touch screen device that looks similar to the 5800 and may be the successor which many people are calling the 5900, and finally a slider. The third row features a Nokia N97 Mini, E52 and E72, and the white slider all alone on the bottom appears to just be a color variant of the slider in the second row. Nokia World is scheduled to take place in a little over two weeks, so we should be hearing more about these devices in due time. Which one are you most excited about?

[Hat tip to Unwired View for not only having the picture, but naming every device] 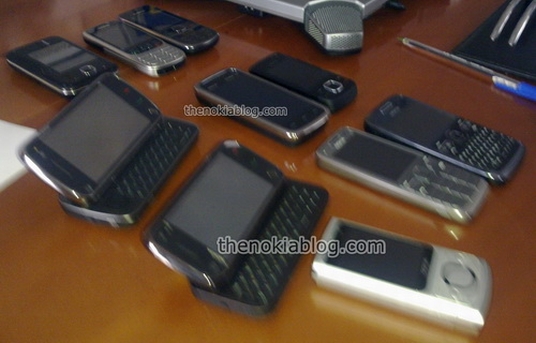 Brief: Nokia vs. InterDigital: Round 9,245: Nokia did not infringe on 4 patents

Nokia and InterDigital have been fighting it our for a few years now, regarding four patents relating to UMTS (aka...