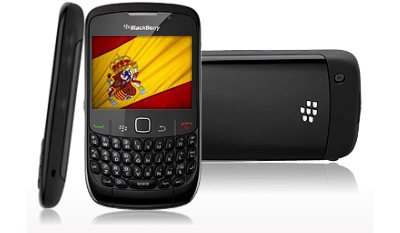 BlackBerry aficionados in Spain will be pleased to hear this little tidbit of news from RIM. Today, the boys and girls from Waterloo made it all official that the BlackBerry Curve 8520 is coming to Spain this September, from various wireless carriers.

The Curve 8520 features a full-QWERTY keyboard (of course), Bluetooth 2.0, 256MB flash memory, a 512Mhz processor, 2MP camera with zoom and video, WiFi and much more.

Note: If any Spanish carriers out there would like me to attend any launch parties, please let me know. I have somewhat of a crush on Spain since my first visit a few years back. Great place to be 🙂

Madrid, Spain – Research In Motion (RIM) (Nasdaq: RIMM; TSX: RIM) today announced the new BlackBerry® Curve™ 8520 smartphone for customers in Spain. The handset, a new addition to the BlackBerry Curve series of smartphones, is expected to be available from wireless carriers in Spain in September.

Madrid, Spain – Research In Motion ( RIM ) ( Nasdaq: RIMM; TSX: RIM ) today announced the new BlackBerry® Curve™ 8520 smartphone for customers in Spain. The handset, a new addition to the BlackBerry Curve series of smartphones, is expected to be available from wireless carriers in Spain in September.

The slim new BlackBerry Curve 8520 is an incredibly approachable smartphone that will come to the Spanish market in two attractive colors – black and frost. For people who like to be connected, it provides easy mobile access to email, messaging ( IM, SMS, MMS ) and popular social networking sites ( including Facebook® and MySpace ) and features a highly tactile full-QWERTY keyboard for comfortable, accurate typing. It also features rich multimedia capabilities and access to music, games and other mobile apps for entertainment on the go.

The BlackBerry Curve 8520 smartphone is a world phone, and is also Wi-Fi®-enabled to arm customers with fast Web browsing and extended data coverage.

In addition to providing customers with the industry’s leading mobile email and messaging solution, the BlackBerry Curve 8520 smartphone is designed to be efficient and convenient. It introduces an innovative touch-sensitive trackpad, which makes scrolling and selection smooth and easy for a great navigation experience. It is also the first BlackBerry smartphone to feature dedicated media keys, smoothly integrated along the top of the handset, giving customers an easy, convenient way to control their music and videos.

“More and more cell phone users are choosing to upgrade to a smartphone and the new BlackBerry Curve 8520 will undoubtedly convince many more people in Spain to make the switch. It is a great new addition to the BlackBerry Curve series and delivers all the great messaging, social networking and multimedia features that customers have come to love about BlackBerry smartphones,” said Carlo Chiarello, vice president, product management, Research In Motion.

Key features of the BlackBerry Curve 8520 smartphone include:

To learn more about the BlackBerry Curve 8520 smartphone visit: www.blackberry.com/curve8520

* Certain music files may not be supported, including files that contain digital rights management technologies.

Torch Mobile, makers of the Iris browser, acquired by RIM; web browsing on a BlackBerry to suck less

Torch Mobile, who make the Iris mobile web browser for Windows Mobile devices, has been acquired by Research in Motion...