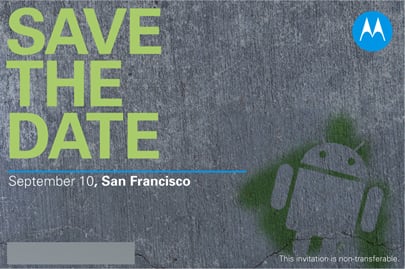 “Save the date.” So reads this invitation we just received from Motorola. The Android-stenciled invitation made its way to our inbox this morning, indicating that Motorola has some sort of Android announcement scheduled for September 10 in beautiful San Francisco. The details are slim at the moment, but all signs point to Motorola unveiling its first Android smartphone early next month. With the Motorola Sholes and Morrison both rumored for October launch dates, the timing seems spot on.

There’s a distinct possibility that the Verizon-bound Motorola Sholes will make an appearance at the event, or maybe we’ll be seeing the Motorola Morrison take the stage as Motorola first Android smartphone. With a little luck, we’ll even see a handset launching with BlockBuster’s OnDemand streaming video service pre-installed.

Android is expected to be the struggling mobile phone maker’s saving grace, so this launch event is about as pivotal to Motorola’s roadmap as it gets. We’ll know more in the coming weeks.