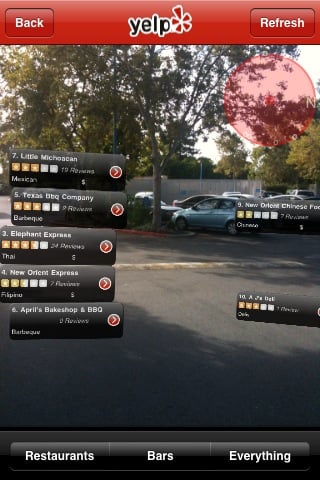 Just yesterday we saw the iPhone AppStore open the doors to Paris Metro Subway. The iPhone app, only supported in Paris (for obvious reasons), gave us a glimpse into the power of AR. The launch of Paris Metro only highlighted how much it would suck to have to wait until Apple officially launched its Augmented Reality API with the iPhone OS 3.1 update before getting to play with AR iPhone apps in the US. That wait, it turns out, was surprisingly short. The US iPhone AppStore has just become home to a new iPhone Augmented Reality app – the first of its kind available in the US.

The arrival of AR iPhone apps wasn’t expected to happen until Apple released their next iPhone OS update – iPhone OS 3.1. With that update, Apple would give iPhone developers special tools to overlay AR data on top of the camera viewfinder. Or, at least that was the general consensus. Thankfully, iPhone app developers have apparently found a way to sneak AR features into the AppStore via app updates – without Apple’s official blessing.

The first AR iPhone app to find its way Stateside is Yelp. The Yelp iPhone app has been a staple of the iPhone AppStore for a while, but a new update has enabled an augmented reality feature called “Monocle.” By shaking the iPhone three times, Yelp for iPhone switches to the unannounced “Monocle” mode, which is basically Yelp’s term for augmented reality. With Monocle enabled, you need only point your iPhone 3GS’s camera at the world to to see nearby restaurant and business locations overlaid on the viewfinder.

It’s actually a bit tricky getting the Monocle feature enabled. I first tried to shake the iPhone as hard as I could. That didn’t work. It’s more about finesse and technique, rather than brute force. Shake the iPhone as if you’re throwing a skipping stone across a pond. Do that three times in a row and you’ll see a pop-up notifying you that Monocle is enabled. You should then see the “Monocle” button in the upper right corner.

If you’re still confused, I’ll post a demo video in a bit, showing how to get the Monocle feature to work.

In the world of wireless cellular service, having good call quality makes a big difference. Nobody wants to deal with...