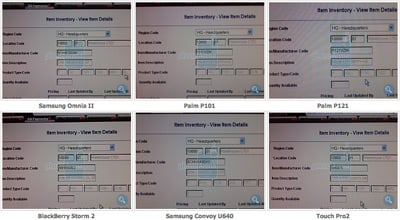 Now this is interesting. PhoneArena has posted some insider inventory shots of devices that have not yet been released on Verizon. Among them is the HTC Touch Pro 2, the Samsung Omnia II, the Samsung Convoy U640 and the BlackBerry Storm 2. All cool… But not the big news here.

More importantly than the devices listed above are the two Palm devices noted within the inventory shots… namely the Palm P101VZW and Palm P121VZW. The Sprint model of the Palm Pre is recognized as the P100, so it would make sense that Verizon’s version of the Pre get tagged as the P101VZW. But what about the P121VZW? Is this the highly-rumored Palm Eos that we’ve been hearing about for some time? Will Verizon have the exclusive on such a slimmed-down webOS-powered device? Or will it launch on Sprint as well? Can I ask any more questions? What’s the day today? Guess I can.

Note: Last I heard, Verizon was gearing up to launch the Pre in the new year. Would make some sense that the Pre and the other ‘mystery’ device have reared their heads now… at least internally.

The upcoming Instinct HD aka Samsung Dash has been caught in the wild. The all-touchscreen phone got the FCC clearance...