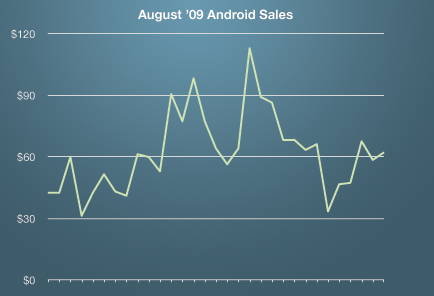 Just the other day, we reported on AdMob’s estimation that the AppStore moved some $2.4 billion every year in iPhone app purchases. Developers have since come out against that estimation, saying that the number is grossly inflated. But, then, AdMob’s numbers for the Android Market are also likely inflated. Turns out, Android developers are seeing some really pathetic sales figures from the Android Market. One top-selling Android developer saw an average of $62 per day in Android Market sales for August 2009 – that’s not even enough to keep the lights on.

Even if AdMob’s $60 million per year figure is anywhere near accurate, Android developers aren’t seeing much in the way of compensation. And, if that number is inflated, those developers are having an even harder time turning a buck. Android developer Larva Labs has posted an analysis of Android application sales that indicates the Android market isn’t worth anywhere near $5M a month. It’s actually an interesting read that points out the fallacy in the mobile app store bonanza – many mobile app developers aren’t going to make any money from their apps.

So, if you’re a mobile applications developer, take note. First, you probably want to develop for the iPhone – as the iPhone userbase is more than twice as receptive to buying apps than Android users. Second, you should do away with any preconceived notion that your To-Do List application will make you rich quick. Third, check out Larva Labs’ blog post on the sad state of Android Market sales.

Changes in store for Android Market?

The Android Market has been open for long enough that people have become used to its look and feel. But,...