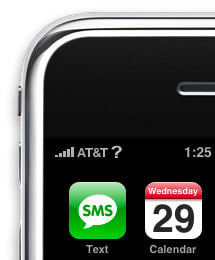 iPhone hopefuls still waiting for Apple to bring the iconic smartphone to other US carriers may soon get their wish. With AT&T’s iPhone exclusivity agreement widely believed to end in 2010, Piper Jaffray’s Gene Munster believes that Apple will bring the iPhone to other US carriers in the summer of 2010. The move, says Munster, will be motivated by the possibility of gaining even greater market share in the US.

Apple moved away from its carrier exclusivity model in France, allowing multiple French carriers to offer the iPhone. The multi-carrier model has helped Apple gain something like 40% of the market. That’s contrasts with the US, where the iPhone is tied to AT&T and only accounts for approximately 15% of the market. Munster believes that Apple is making up for lost revenue from exclusivity agreements (like revenue sharing) by selling more iPhones.

If Apple were to announce an iPhone for another US wireless carrier, like Verizon Wireless, they’d likely do so alongside their iPhone 3GS refresh next Summer. Verizon Wireless has been showing more interest in the iPhone, and has been fast-tracking the launch of their 4G LTE network for early 2010. With a little luck, Verizon’s first iPhone could be the US’s first LTE handset.

iPhone accounts for nearly all handheld WiFi hotspot access in US!

Now here's an interesting little factoid gleaned from a new research report from JiWire. It seems that, when it comes...