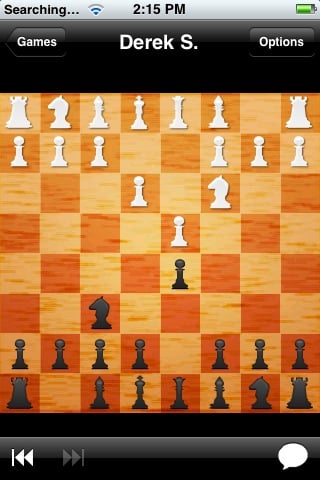 AppStore rejections are becoming a matter of public record. Today, another iPhone app gets rejected from the AppStore. This time, the iPhone app is a game called Chess Wars from iPhone developer Joe Stump. The latest Chess Wars app update has apparently been sitting in Apple’s app review process for six weeks, with no word from Apple. Joe’s app, it turns out, had been rejected by Apple for using chat bubbles that look too much like the iPhone’s SMS chat bubbles.

The problem is that the current version of Chess Wars has a bug that prevents some users from playing. Neither Blunder Move nor Apple caught the bug in the previous update. They just decided to reject the update and leave Joe in the dark.

Why Apple wouldn’t want to maintain a consistent UI experience throughout the iPhone OS and its apps is beyond us. The point is, they rejected the latest (and I use that term loosely) Chess Wars update because it was too consistent with the iPhone UI.

Finally, after waiting six weeks, pleading with Apple employees and finally posting a scathing commentary on Apple’s review process, Apple contacts Joe to let him know that he needs to change his chat bubbles to get his bug-fixing update approved for the AppStore.

Here’s what Joe has to say on the matter:

What pisses me off most about this, and what I conveyed to our contact at Apple, was that it took a widely publicized profanity laced blog post to get their attention. I asked, specifically, why it took weeks to get such a simple response of “Hey, change the chat and we’re good.” back. To Apple’s credit they said I deserved an answer to that question and are looking into it.

Apple still talking to China Mobile behind China Unicom’s back

Uh oh. What do we have here? It seems that Apple isn't satisfied with putting their hands all over China...