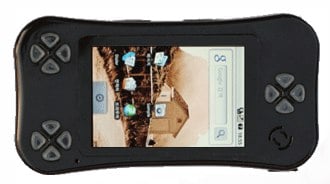 What happens when a little-known manufacturer tries their hand at creating an Android-powered handheld gaming device? You get the ODROID Android “entertainment device” from Hardkernel. You also get a handheld device that not even its mother could love – because it’s so fugly (just to be clear). On the bright side, the feature-set is decent – you get an iPhone-esque 600MHz Samsung S5PC100 ARM Cortex A8, 3.5-inch capacitance-based touchscreen (320 x 480 resolution, just like the iPhone), 720p-capable HDMI-out, composite TV-out, headphone jacks, microSD and SD card slots, and WiFi.

The ODROID Android handheld doesn’t have any sort of cellular connectivity, so you’re not going to be able to make any phone calls or pull down 3G data. But, as a gaming device, all that processing power and all those hardware buttons should make for a really smooth gaming experience. It’s just too bad the ODROID looks like it fell from the ugly tree, hitting every branch on the way down.

Is this the Android-powered Samsung I5700 Galaxy Lite?

We dig the idea that Samsung is preparing to launch another Android-powered device called I5700 Galaxy Lite. Heck, we've even...