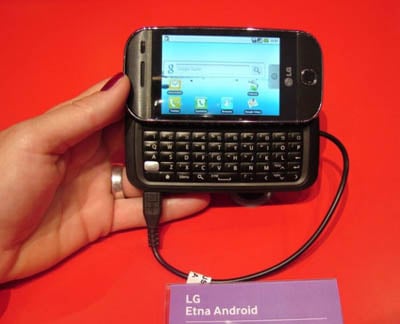 Well looky here, a shot of yet another Android-powered device has leaked… and what manufacturer is it, wait, oh, yep, it’s LG! Spotted in the Vodafone booth at IFA Berlin, the good peeps over at Chip Online managed to take a few snaps of LG’s first venture into the Android arena… the LG Etna.

Of course, details are sketchy at best, but here’s what we know so far. The LG Etna packs a 3″ display, 5MP camera, full QWERTY keyboard (slider), Bluetooth and USB. That’s it that’s all for now. Take a gander at the image above and let us know what you think in the comments.

Stay tuned for more on the LG Etna!

Android Boots Up on HTC Kaiser

It's not a new trick, but it is one that never gets old. This HTC Kaiser, perhaps better known as...