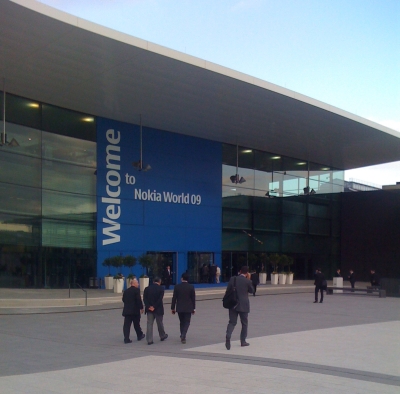 While I wasn’t at Nokia World 2009 this year, I did live in front of my laptop last Wednesday and Thursday, hitting the refresh button in my browser repeatedly, and gathering information from as many resources as I could find on the internet to mash it all up into the “IntoMobile’s Official Nokia World 2009 Coverage Blog Post“. Now that I’ve had a weekend to chat with some friends about Nokia World, play with a Nokia N900 at the Nokia Flagship Store in Helsinki, and lay in bed collecting my thoughts, I’ve got to say that I’m a bit disappointed.

First let us talk about the hardware:

At 450 Euros ($645) before tax, the Nokia N97 Mini is priced way too high for what you’re actually getting. Nokia was walking a tight rope when deciding the price of this device. If they priced it too high, it would not sell — people would just pick up the bigger brother, the N97. If they priced it too low, the N97 would not sell since people would just pick up the Mini, which is just as capable. If the N97 Mini was 350 Euros, or even 375 Euros, I would have been throughly impressed. Sadly, this was not the case.

The N900 is coming out next month for 500 Euros before taxes, and we’ve already seen that it’s available for preorder in Italy and Germany for 600 Euros, France for 650 Euros, and America for $650. It’s the first device the company is offering that has a new, incredibly fast, ARM Cortex A8 processor, the only other mobile devices that use this processor today are the Apple iPhone 3GS and the Palm Pre. The size: it’s bloody huge at 110.9 mm × 59.8 mm x 19.55 mm and heavy at 181 grams. The keyboard layout is also similar to that of the Nokia N97, which still gives people problems since entering a space or proper punctuation is unintuitive.

The software, Maemo 5, is a pain in the ass for developers since Nokia has admitted in public that Maemo 6 will come out in a year and it will break compatibility due to a switch from the GNOME environment to Qt. The browser, built on top of Mozilla technology, the same code that powers Firefox, is a step away from WebKit, the browser engine that powers Safari in the iPhone, the browser in Symbian, the browser in Nokia’s dumbphone OS known as S40, the browser in Android and soon the browser in RIM BlackBerry devices. Why is Nokia supporting something contrary to what the industry has already accepted as best in class? What’s the strategy?

I played with a Nokia N900 this weekend, and from the brief 15 minutes I had with the device I was not impressed. I would say more, but I’m not going to since the device was clearly labeled as beta and the software was obviously final. I’ll wait until I get a review unit in my hands to pass judgement on what many are calling the device and operating system that will power Nokia’s future high end device lineup. I don’t know what sort of magic Nokia can pull in the few weeks left until this device ships, but I remain optimistic since the Maemo boys have a lot to prove.

The X6 is a “Comes with Music” device meaning you can only buy it in territories that offer the “Comes with Music” service. Yes, it is Nokia’s first capacitive touch screen device, but that doesn’t change how unfriendly S60 5th Edition is to new consumers and S60 experts/fanbois. It will cost 450 Euros ($645) before tax, which is again, quite a lot of money for nothing more than a minor upgrade to the Nokia 5800 XpressMusic. My opinion of this device would have surely changed if it was offered without the “Comes with Music” tax, which is roughly 110 Euros. At 340 Euros ($485) the X6 would have been fantastic, but no, Nokia wants to push their services on to you, even though you probably already have an extensive music collection, and if you live in Europe or Asia you probably pirate so much that you have at least one external hard drive. I have two.

The X3 is a cheap slider with a 3.5 mm headphone jack, and it’s quite attractive. At 115 Euros ($165) it is priced to move, but why doesn’t it come with GPS? The Nokia 3710 Fold, which was announced earlier this summer, is 25 Euros ($35) more expensive and it has not only GPS, but 3G as well. The only bad thing about the 3710 Fold is the 2.5 mm headphone jack. Now I understand the need to make cheap devices for consumers in emerging markets, but the X3 could have been so much more impressive if it just had a GPS chip inside. Once you experience the power of knowing where you are on a map at any given moment, you can never go back to a device without GPS or the awkwardness of using a paper map.

I don’t know where to begin with the Booklet 3G. The hard drive: 1.8 inches, 4200 RPM, it’s the same hard drive found inside the iPod Classic. I once had a computer with a 1.8 inch 4200 RPM hard drive, the IBM (now Lenovo) ThinkPad X40. It barely ran XP well enough, but I didn’t mind since I used it purely for taking notes in class. With WiFi off I used to get 7+ hours out of that thing, which was unheard of back in 2004. They say the Booklet 3G will get 12 hours of battery life, but I’ll wait for independent reviews to confirm that fact. Back to the hard drive: replacing a 1.8 inch hard drive is difficult due to the limited availability and choice of going with a non standard hard drive size. A majority of the notebooks on the market today have a 2.5 inch hard drive. The RAM: 1 GB, soldered in, not upgradeable. I would have been fine with 1 GB of RAM if I could crack open the case and shove a 2 GB stick inside, or better yet had an option to get a Booklet 3G with 2 GB of RAM inside, but nope, you can’t do that. The price: At 575 Euros ($820), what the fuck was Nokia thinking?

Back in the day, PC people would make fun of Apple people because they spent more on their hardware. It was called the “Apple Tax”. Today prices have more or less equalized between machines of similar specifications. Now it is Nokia who thinks they can impose a “Nokia Tax” and get away with it just because they have a top brand name. It’s ridiculous. Had the Booklet 3G been 400, or even 450 Euros, I would have bit my lip and lived with the low system specifications, but again, the company has failed to find an attractive price point.

The 5230 is the only device I actually liked. It’s cheap at only 150 Euros without “Comes with Music” or 259 Euros with “Comes with Music”. I love that as a consumer, I have a choice. It has 3G, it has GPS, it has a 3.2 inch touch screen, and sure the camera sucks at only 2 megapixels, but for 150 Euros I’m more than willing to forgive Nokia for that. This thing will be in the hands of millions. If I wasn’t doing too well financially and needed a new phone, this would be the one I’d pick up.

Nokia Money is brilliant on paper, and I was expecting a hell of a lot of demos and more detailed information about the service at Nokia World, such as fees per transaction, but instead heard absolutely nothing that already wasn’t mentioned in the press release that launched a week before the show. That was a disappointment.

Nokia-Facebook tie up: Only works if my friends have a S60 5th Edition device; not to mention that I recently closed my Facebook account. Useless.

And that’s it … which is weird. You’d think they would have more services to announce and talk about being an internet company, solutions company, or whatever they’ll call themselves by this time next year.

I hear people say Nokia is dying, Nokia is dead, or some other ignorant statement similar to that, more and more often now thanks to competition from the iPhone and Android. Nokia knows that they’re not competitive on the software front, so they’re competing with the one thing they have they do have: scale.

In time, Nokia will become more competitive; I’m sure of it. Anssi Vanjoki’s keynote alluded to the fact that the next version of Maemo, coming out in roughly a year, will finally materialize the company’s vision of mobile computing. We also have yet to see the DirectUI user interface that will replace the over half decade old Symbian UI that bloggers and geeks love to hate. Nokia is a company in transition right now and from the outside it looks like the transition is not going very well.

Apple has set a bar that Nokia has not yet passed, and every year that goes by and Nokia doesn’t meet or exceed that bar, people become more and more restless, frustrated and unsatisfied. Nokia World 2009 was the company saying “we need more time” and that is why I’m honestly disappointed.

Video: Nokia Money demo; it looks brilliant and I want it right now

Nokia is trying to get into the mobile transactions space with Nokia Money. The service looks to be as simple...