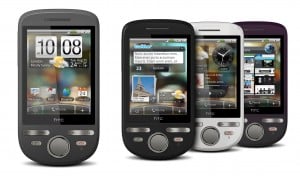 The Android-powered HTC Tattoo, which had made its original appearance as the Click and recently bubbled up on Bouygues, has now gone official with an early October release date for Europe. Before you ask, yes, it will be hosting the Sense user interface made popular by the Hero, and the mid-range specs suggest a slightly lower price point.

Personalization is a big part of the pitch for the HTC Tattoo, hinting that “people are able to design and purchase their own unique covers or search and select from popular cover designs” – a very cool differentiator. I really hope that the user interface changes along with the cover, like Nokia does on the N79. The Tattoo’s product tour shows the device appropriately getting inked, so there’s bound to be a wide selection to chose from. Footprints is also clearly shown, allowing you to geotag your pictures and add extra audio or text information right from a homescreen widget. No word on price point, but the Tattoo will be making it “around the world in the following months”, so we can certainly expect it in North America sooner or later.

In case you forgot, Motorola is going to be holding an event on the 10th of September to announce a...