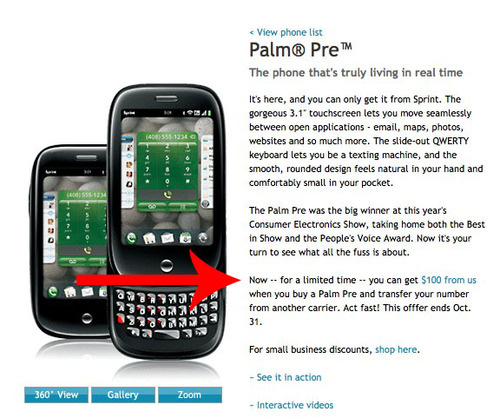 In a move that could most generously be called a tease, Sprint has withdrawn its $100 bait for new customers willing to pick up a Palm Pre, a mere six hours after the promo was announced. Why the change of heart? According to a Sprint spokesperson:

“After further internal review today, the offer of a port-in service credit of $100 to new customers who buy the Palm Pre has been pulled, because it was put into the system in error.”

Well, damn, getting a half-price Palm Pre for switching wireless providers seemed like a pretty sweet deal, although certainly not too good to be true. Maybe Sprint remembered that they were actually going to axe fifty bucks rather than a hundred, or maybe they need to reasses pricing options with the Pixi coming out soon. One way or the other, that’s a bummer for people who were excited and thought they had until the end of October to take advantage, but here’s hoping Sprint reinstates some kind of Pre-motion for the holiday season.