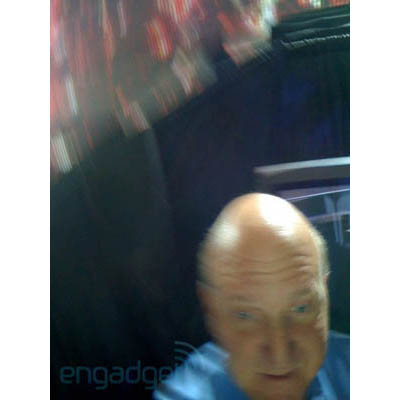 For some reason I’m not surprised at all to hear about this one. Apparently, at a Microsoft gathering at Safeco Field in Seattle, things went down… It was all light-hearted so I hear, but still, it went down.

When Steve Ballmer took the stage at Safeco, he noticed a member of the Windows group attempting to snap his picture on an iPhone. Steve quickly grabbed the phone, made a few ‘funny comments’, placed the iPhone on the ground and then began to pretend jumping on it… Of course, no damage was done to the iPhone, but some damage may have been done to the employee. In fact, later on during the presentation Ballmer made sure to note ‘he hadn’t forgotten’ about the iPhone toting employee. Ominous.

I know deep down at heart Ballmer was joking here (at least I hope so), but this attitude is highly counter-productive. Embrace the competition. Run with it. And focus on building a Windows Mobile device that everybody and their dog will want to use. Can I get a seconder?

Note: The picture taken above is apparently from said employees iPhone. Can’t say for sure if it’s the real deal or not. Kind of reminds me of Telly Savalas pushing the Diner’s Club card.

The University of San Diego is going mobile with the launch of the so called "MySDMobile" service (web site) and...