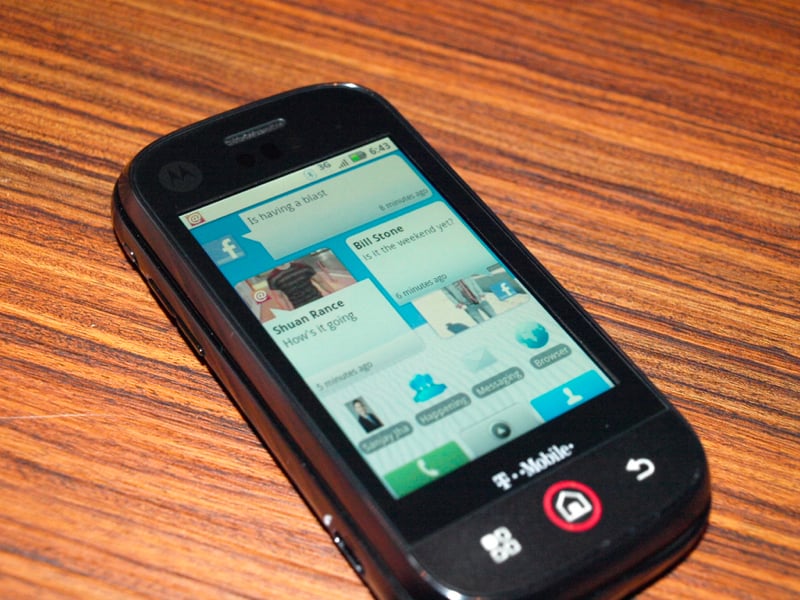 Motorola today announced its first Android phone at Mobilize 2009 as the interestingly named Motorola CLIQ. The unveiling finally brought the Motorola Morrison out of the shadows and into the mainstream. Thankfully, the CLIQ looks more impressive in person than it ever did in the leaked Morrison images we’ve been seeing for the past couple months. And, because customized homescreens are 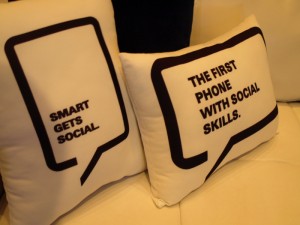 the hot-ticket these days, Motorola CLIQ’s hardware is complemented by Motorola’s custom Android UI, dubbed the MOTOBLUR. Motorola will have you know that MOTOBLUR isn’t just an Android skin, but an integrated service that pushes updates from all your social networks straight to your homescreen. But we’re getting ahead of ourselves.

Let’s take a look at the Motorola CLIQ.

The CLIQ will hit T-Mobile USA’s network later this year as an exclusive. Other parts of the world will get the Motorola Morrison as the Motorola DEXT, which just proves that Motorola loves them some CAPS! Pricing and launch information isn’t yet known. 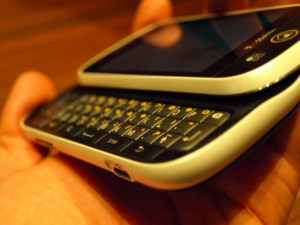 From our limited hands-on time with the CLIQ, it’s clear that Motorola took some seriously fine-toothed combs to the hardware details. The keyboard keys are tactile enough to touch type. The slider mechanism slides out with a smooth “snick” that makes us giggle a little every time. There’s a nifty backlit Motorola logo on the backside of the slider – a nice touch to be sure. The camera is good – not sure if it’s “really good,” but it’s at least “good.” To top it all off, the touchscreen is nice and slick (capacitance!) 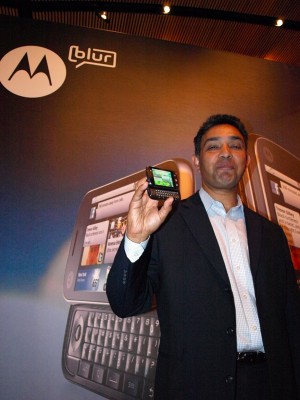 But, like the HTC Hero, it’s the CLIQ’s UI that makes it stand out from an increasingly crowding Android market.

The CLIQ is skinned with a new homescreen that Motorola calls the MOTOBLUR service. Motorola has been calling MOTOBLUR everything from a “service” to a “solution” to “social networking that just works.” We call it cool. The idea behind MOTOBLUR is to give the CLIQ a unique Android homescreen that not only makes for a finger-friendly experience, but also makes for a new kind of social networking experience. MOTOBLUR automatically trawls all your social networks (Facebook, Twitter, MySpace) for contact information, contact pictures and status messages and pushes all that information into the CLIQ’s widget-based user interface – contact information is automatically updated with status messages, for example. MOTOBLUR also pushes emails, text messages and news feeds straight to your CLIQ’s homescreen. Palm had the same idea with the WebOS’s Synergy feature, but Motorola had the foresight to center their UI around the MOTOBLUR UI.

We’ll have more for you once we get a Motorola CLIQ of our own.

For now, enjoy the hands-on video and photo gallery!

[Update]
Post updated so that it actually has a photo gallery. Wired posted up some unpublished photos here.

Hands-on the Motorola CLIQ and the MOTOBLUR UI from IntoMobile on Vimeo.

Alejandro Salomon, the guy behind a lot of recent videos of the Storm 2, is now walking us through the...