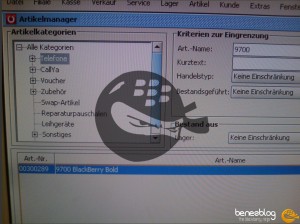 The BlackBerry 9700 Bold (Onyx) has been all but announced on T-Mobile, AT&T, Bell and Rogers, but we haven’t heard much about what’s happening on the other side of the pond. Well, this screengrab from Vodafone Germany’s internal system shows the upcoming Bold bright as day, and it’s safe to assume that the 9700 will work its way around the rest of Europe through Vodafone. If you haven’t had a good look at the Onyx yet, it will be packing a slimmer form factor, better camera, and more application memory than the original BlackBerry 9000, while keeping the same outstanding keyboard and display. The new trackpad will also be a big pull for people who got a taste of the future on the 8520 Curve, but are holding out for some beefier specs.

[via The BlackBerry Ninja]

Vodafone UK have been busy with the announcement of their Mobile Broadband hotspot. Now, you might recognise this bad boy...