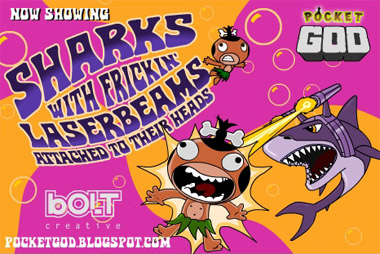 One of the most popular iPhone games, Pocket God, has been recently updated with brand new features. Episode 25 rocks Austin Powers-style “Sharks With Frickin’ Laserbeams Attached to Their Heads,” which is hilarious. This means that you will be able to replace the Bait Master Anchor with the new Chum Bucket, scattering shark bait around the sea, or handing it to a doomed pygmy. In addition, once sharks appear, you can aim lasers using accelerometer control!

As for the other part of the story, which talks about future game development, we’ve heard that the episode 26 will introduce zombie pygmies. You will be able to take a pygmy and bury him alive, only to see him returning later as a brain-eating zombie…

All in all, if you still haven’t, you should join all the people who already grabbed Pocket God. There’s a reason why it’s one of the top titles in the AppStore, as I’m sure you can tell. 😉

Like many modern companies, Insurance Quotes.us doesn't want to miss the iBoat, hence they've launched a free retirement application in...