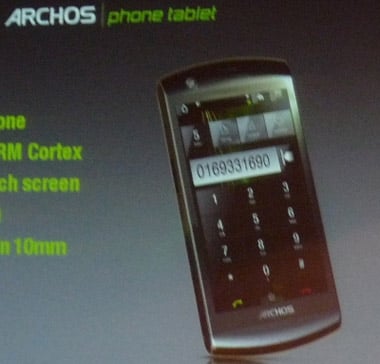 At its recent press event in Paris, Archos presented its first Android-powered device – Archos 5 Internet Tablet. It’s not something we at IntoMobile.com care about much, but there was one thing that was also shown at their presentation – an image of the upcoming phone tablet. We don’t have all the details at this stage but we do know the following:

In a nutshell, Archos is preparing to hit the mobile phone market and hit it hard. If they manage to make every piece of the puzzle fit correctly, they may have a global winner. I’m certainly hoping to see some company bringing Android to the “WVGA century”… and make a new device work as phone, as well. 😉