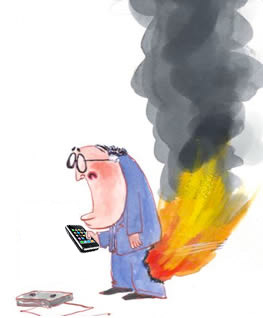 The timeline of events here is what’s interesting. First, The FCC launched an investigation into Apple’s handling of iPhone apps – sparked by Apple’s banning of third-party Google Voice apps GV Mobile and VoiceCentral from the AppStore. That investigation prompted a response from Apple, in which they claim that the Google Voice app from Google was still under consideration for the AppStore. Google also responded to the FCC’s inquiry into Apple’s AppStore rejection policies, but requested the FCC to keep the comment under wraps.

This is where it gets fun.

With Apple sticking steadfast to their story that they hadn’t rejected the app, Google today lifted their FCC confidentiality request, allowing the public to finally see Google’s full comment on the matter. In Google’s full response to the FCC, they blame Apple for straight out rejected the Google Voice app. Google says that Apple rejected the app because the dialer duplicated functionality that was already available on the iPhone (the phone dialer).

On July 7, Eustace and Schiller spoke over the phone. It was during this call that Mr. Schiller informed Mr. Eustace that Apple was rejecting the Google Voice application for the reasons describe above in 2(a).

On Apple’s side, the iPhone maker responded, in a statement to Silicon Alley Insider, that Apple does “not agree with all of the statements made by Google in their FCC letter. Apple has not rejected the Google Voice application and we continue to discuss it with Google.”

So, if Google’s comment is to be believed, Apple lied to the FCC about rejecting Google Voice from the AppStore. If Apple is right, Google is lying about their Google Voice app being rejected. They can’t both be right. Either Apple or Google lied to the FCC, and will probably have to face the music sometime soon. What kind of music will that be? Probably the kind that brings heavy federal sanctions down on the liar.