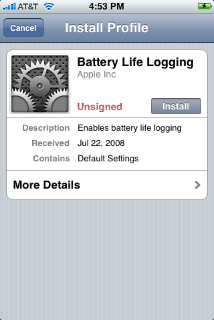 Apple’s latest iPhone OS 3.1 update was initially welcomed with open arms. The new iPhone OS promised genius mixes, phone number copy/paste, improved video editing, remote lock (via MobileMe) and better Exchange support. Alas, iPhone OS 3.1 proved to be a headache for Exchange users on older iPhone hardware (iPhone, iPhone 3G). And, there are reports that iPhone OS 3.1 has been draining iPhone batteries faster than ever. The good news is that Apple is looking into the matter.

The iPhone Blog is reporting that Apple is contacting some iPhone users that complained of poor iPhone battery performance following an update to iPhone OS 3.1. Apple reps are apparently asking users 11 questions about their iPhone habits. One question asks if the user thinks the perceived drop in battery power was real or just a bug with the battery icon. It’s clear that Apple has no idea what’s causing the reported battery drains.

Apple is also distributing an unofficial iPhone app that monitors iPhone battery logs. The app, which is being sent out to certain users, phones home to Cupertino to report battery activity with every iTunes sync. Let’s hope Apple can get to the bottom of this…

The iPhone's on-screen keyboard is either crazy convenient or arduously awkward. iPhone owners that have mastered tap-typing at 40 words...