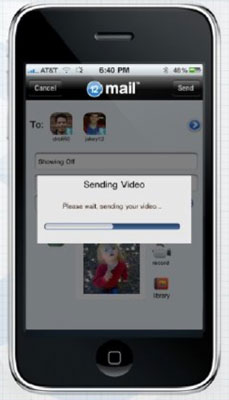 12seconds.tv has another iPhone app available as of today, called 12mail. In short, it lets you send 12 second-long video clips as messages to friends on Twitter and Facebook. The address book populates after linking twitter and Facebook to your 12mail account, after which you can not only send them private video clips, but also publish publicly. This isn’t the first iPhone app 12seconds has released – not too long ago, they announced a free 12cast app which was something of a primer for 12mail. 12cast was a simple way to share public 12second clips, which might be a little antiquated now with 12mail, but we’ve been assured that they “have other plans for 12cast”. On the downside, original iPhone and 3G owners will only be able to send messages that are a still image with voiceover, with the full video messaging exclusive to the 3GS model. Still interested? Download 12mail now from iTunes, or check out 12seconds for more information.

iPhone developers the world over have been up in arms recently over Apple's handling of iPhone application submissions and approvals...