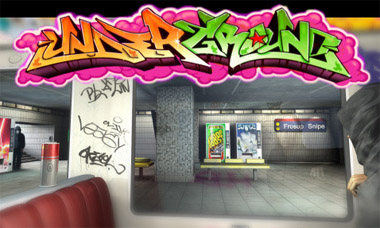 Chillingo has a new shoot-em-up game in the AppStore called Underground.

Underground takes you on a journey with a graffiti artist through the underground transport system as you battle through his inner demons on a mission to rectify a previous art crime. Fight your way through a series of street art inspired levels and lift the curse that haunts their every move. Unfold the story as you stop at each beautifully 3d rendered station and get closer to the truth behind the myth. Classic 2d side scrolling shoot em up gameplay takes you between the stations and represents the thoughts and anxieties of our cursed artist as they make their way to their final destination.

You can use both accelerometer and multi-touch controls in the game as you play across three difficulty levels: Easy, Hard and Impossible!; fighting 60 different enemies with a range of behaviors. In addition, there are 11 different weapons you could use to shoot every single creature that crosses your way.

Also interesting is that the graffiti artwork in the game was created by Mr Frames, who has previously been commissioned by the BBC, MTV and Royal Academy of Arts… AppStore link is here.

All hail iPhone OS 3.0! It's only by the good grace of iPhone OS 3.0's new third-party accessory support that...