You’ve probably never heard of Dopplr. If you have, you’re probably willing to throw-down in Dopplr’s name. For those of you in the first camp, Dopplr is a travel planning site that draws on the power of social networks to give you travel tips and advice from people just like you. And, for some reason, TechCrunch reported that Nokia had just acquired Dopplr for somewhere between €10 million and €15 million ($15 million to $22 million) for Dopplr.

It’s not clear what Nokia would do with Dopplr. Nokia’s been gobbling up smaller companies left and right recently, and was most recently rumored to be interested in buying Palm.

But, that’s not the whole story. Following up on Michael Arrington’s post on TechCrunch, which claimed that an insider confirmed Dopplr’s acquistion by Nokia, one of Dopplr’s co-founders apparently noted that the rumor was full of bull – actually, he said the rumor was “completely fabricated.” The tweet went so far as to include a #TechCrunchFail hashtag. 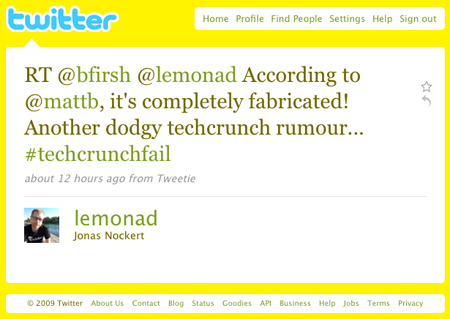 Dopplr is officially keeping mum on the matter, for now.

[Via: WashingtonPost and ArcticStartup]