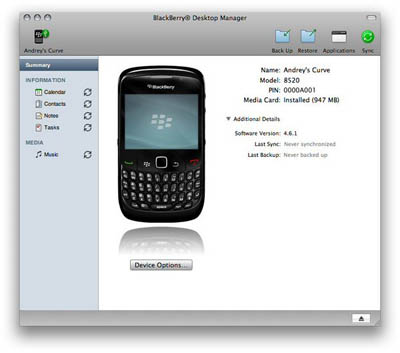 BlackBerry users rockin’ a Mac for their computing needs have been waiting patiently, oh ever so patiently for this. Years and YEARS of waiting in fact. Then, when the rumors and speculation finally get to where we think it’s going to happen ‘all official’ and stuff… Nope, more waiting, and a little more frustration!

Of course, I’m talking about the BlackBerry Desktop Manager for Mac users… and thankfully, the news here is full of awesomeness today. RIM has officially announced that the BBDM for Mac will be released this Friday, October 2nd at 1PM EDT. You’ll be able to download it for free from www.blackberry.com/mac.

Mac users, do a little dance, gimme a high five, and check out the full press release after the jump!

New software makes it easy to sync data between Mac applications and BlackBerry smartphones; free download scheduled to be available on October 2

WATERLOO, ONTARIO–(Marketwire – Sept. 30, 2009) – Research In Motion (RIM) (NASDAQ:RIMM)(TSX:RIM) has exciting news for Mac(R) users that want an easy and reliable solution that syncs their contacts, calendar appointments, tasks and notes with their BlackBerry(R) smartphones. A new version of the BlackBerry(R) Desktop Manager software has been developed specifically for Mac users. The new desktop software is scheduled to be available for free download from www.blackberry.com/mac on Friday, October 2 at 1:00 p.m. Eastern Daylight Time.

* Certain music files may not be supported, including files that contain digital rights management technologies

DataViz was all proud to announce that two of their apps -- Microsoft Exchange ActiveSync client - RoadSync, and mobile...