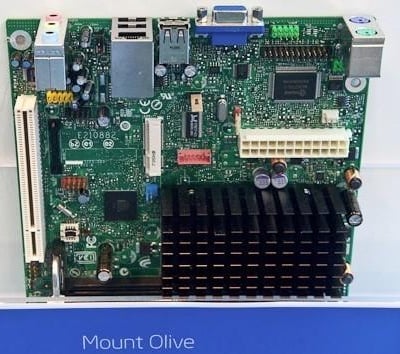 I’m not going to list the reasons why I think the Apple Tablet doesn’t exist, I’ve done that already in a 3000+ word rant last month. Hell I got a phone call from Fox News to comment on a story. Yes I read the recent “Ten New Details on the Apple Tablet” article by Jeremy Horwitz on iLounge and it’s total bullshit.

What I do think will be announced in Q4 2009 however is an updated MacBook using Intel’s upcoming replacement to the current generation of Atom processors. The Pine Trail platform, consisting of the Pineview processor, will come out as early as next month. Two CPUs based on the new architecture will come out with it as well, the D510 (code name Mount Olive, pictured above) and the D410. Both have hyper threading enabled, both run at 1.6 GHz, both do not require a fan for cooling. The D510 is dual core, while the D410 is single core. One of those two chips will end up in a low cost, probably $800 MacBook computer that will have a decent amount of battery life. The current Intel Atom platform consumed 33 Watts, while Pine Trail only runs on 15 Watts. This will allow Apple to ship a MacBook with a small battery, and still achieve 6 hours of battery life, while being able to cut the price. Other netbook makers are going to make 14 and 16 hour netbooks with massive batteries, but Apple isn’t going to make their MacBook look more attractive to people on the go than their MacBook Pro lineup. I may be right, I may be wrong, but I’m going to reference this post when the new MacBook comes out and when June is over and no iTablet has been announced.

BlackBerry users rockin' a Mac for their computing needs have been waiting patiently, oh ever so patiently for this. Years...