Smartphones are becoming the norm in the mobile space. Thanks to the iPhone, consumers are now more aware of smartphones and their capabilities than ever before. And, according to a new survey from CFI Group, the smartphone that sparked the current smartphone boom is still tops in consumers’ minds. The survey gives the iPhone a score of 83 (out of 100) in customer satisfaction. The webOS-powered Palm Pre and Android-powered smartphones tied for second-place with a customer satisfaction score of 77 points. Smartphones running the Windows Mobile or Symbian operating systems are lumped together with a last-place score of 66. 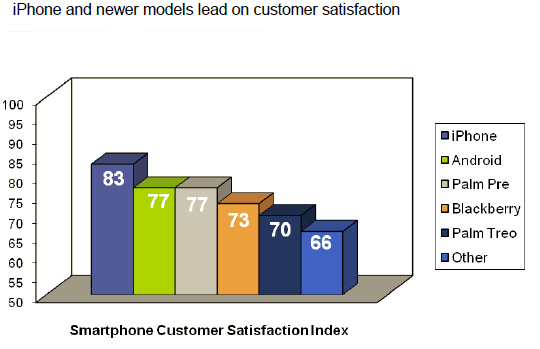 But, the surge in smartphone adoption isn’t without its own drawbacks. Apple’s always satisfying iPhone has been something of a bane for AT&T’s 3G network. With droves of iPhone users hammering away at the wireless network, AT&T has been having a tough time keeping up with demand. The exclusive US iPhone carrier scored the lowest in customer satisfaction ratings – 69 and 66 in customer satisfaction and likelihood of recommending the carrier to others, respectively. T-Mobile (79/76) and Verizon Wireless (70/77) were virtually tied as the most satisfying wireless carrier in the US. Unfortunately, only 38% of Verizon customers felt their smartphone was the ideal smartphone. That last bit highlights how far behind the market Verizon lags in bringing compelling hardware to their subscribers.

It seems that the iPhone is the smartphone to have. But, it also comes tied to the worst wireless network in the US. If you’re looking for the best wireless performance, you’ll have to trade cool hardware for Verizon’s superior network. T-Mobile looks like the best compromise. Especially with the Android-powered myTouch3G and Motorola CLIQ boosting its smartphone portfolio.

For what it’s worth, there’s a lot of cool stuff happening in Android development circles. With a little more time to mature, Android devices like the HTC Hero and Motorola Sholes could finally give the iPhone reason to sweat.

The $49 refurbished iPhone 3G from AT&T is too good to pass up, again

AT&T's making it really, really hard for anyone to pass on putting an iPhone 3G in their pocket. If you're...