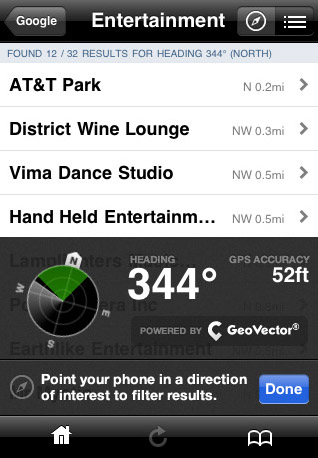 A company called GeoVector has launched what they say is the directional search and pointing application for mobile phones called GeoVector World Surfer. Available for the iPhone 3GS and Android-powered device owners, the app takes advantage of the built-in compass and GPS, allowing users to point their phones in a particular direction to search for retailers, restaurants and other points of interest.

GeoVector has been working with NEC and Mapion since 2006 to offer this technolgy in Japan. Prior to that, GeoVector has worked with pointing and augmented reality capabilities for mobile devices since 1991.

However, as far as I’ve understood, their iPhone offering is not an augmented reality app (at least I couldn’t see a viewfinder in the screenshots), but it does work in a similar manner, providing you only with the data relevant to the position where you’re looking at. As for the mentioned data, you can visit the location’s website, get reviews, place a phone call, check for pictures or YouTube videos, search Google, see the location on a map and be guided there using an interactive arrow. Once you find few places you like, it’s easy to bookmark them for later access.

Initial US content channels for World Surfer include Google, Microsoft Bing, Yahoo! Local, Wikipedia, Papa John’s International pizza restaurants and a Starbucks coffee tracker. In addition, thanks to its open platform, GeoVector hopes to add more content channels and in that sense they’ve released the API documentation for developers.

More information is available from a dedicated website. AppStore link is here (price is $2.99) and the Android device owners can look for GeoVector in the Android Market.

Smartphones are becoming the norm in the mobile space. Thanks to the iPhone, consumers are now more aware of smartphones...