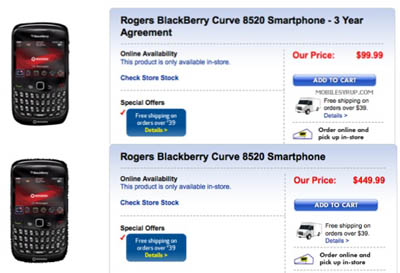 If you’ve been reading my posts over the past few days, you’re no doubt aware of my frustration when it comes to the Rogers BlackBerry 8520 release in Canada. Details have been sparse at best, and news of the 8520’s launch in other parts of the world have been rolling on in quite consistently. However, that’s all about to change.

Best Buy has either accidentally or purposely listed the Curve 8520 on their website, which can only mean an official launch can’t be far off. On the Best Buy site, the Curve 8520 is listed at $99 on a three-year contract, or $449 outright. These prices sound spot-on to me… Now, all we have to do is wait for the official word from Rogers. Any bets as to when we’ll hear word?

To go along with the release of the BlackBerry Desktop Manager for Mac today, I thought sharing a little BlackBerry...