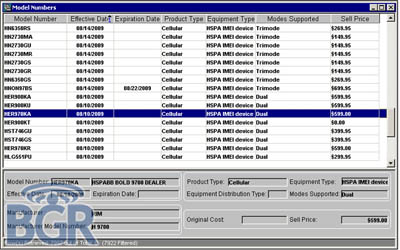 Back in August we got our first ever-so-blurry peak at the BlackBerry 9700 on Bell’s systems. While the shot wasn’t that impressive, it did give us some kind of confirmation that the latest edition Bold will be coming to Bell in the near future.

Today (via BGR), it looks like Mr. Blurrycam can take a back seat to a clean, crisp image leaked of Bell’s internal systems… An image that clearly shows off the Bold 9700 for all to see. You’ll note the pricing set at $599.00, which will clearly be the off-contract price. Kind of odd, as Bell tends to price their devices at X dollars plus 95 cents, but meh, whatever. However you slice it, we’re likely to see the launch of the 9700 real soon, alongside Bell’s new HSPA network.

Important note: System shots of the BlackBerry Curve 8530 have also been spotted on Bell’s systems too. The device will run $499 off-contract.

This week in fake devices: Mixing it all together, again 3

We have five devices to present / warn you of in our "This week week in fake devices" post. Without...