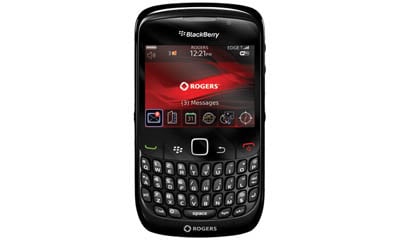 A quick update on the Rogers BlackBerry Curve 8520 situation. Earlier this month we happened upon some groovy pricing on the 8520 via the good folks at Best Buy. Once again, they appeared to tip Rogers hand before any official announcement or statement was given (way to go Best Buy, keep ’em comin’ 😛 ). If the Best Buy pricing is accurate, the Rogers 8520 will run $99.99 on a 3-year contract, and $449.99 outright.

Today, looking back at the post and heading over to Best Buy, I realized I missed one very important thing. The launch date. According to Best Buy the Rogers Curve 8520 will be available October 9th. That’s only 2 days from now. Groovy.

Should hear some sort of official announcement from RIM any time now… any bets?