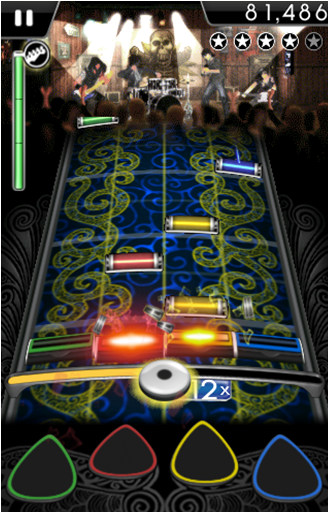 Rock Band is on its way to the iPhone! Forget everything you thought you knew about beat-matching music games on the iPhone, EA Mobile’s Rock Band is by far the best in its class. We had a chance to sit down with EA Mobile at CTIA WITE 2009 to get a sneak-peek at Rock Band for iPhone, and it’s looking good. The game gives you the option of playing on your own, taking a world tour (as you unlock points for new songs) or jam with up to four of your iPhone friends in person or over the internet. Linking up for 4-way multi-player mode is done over Bluetooth, so you don’t even have to worry about finding a hotspot to get your jam on!

The iPhone port of Rock Band gives the gamer the same look and feel as the console version – graphics, gameplay and sound effects are all very familiar. Just like the console version, Rock Band for iPhone offers four different instruments to play – bass, guitar, drums and even vocals. The game comes loaded with 20 songs, all of them master versions from the real-life band (no cover songs). And, with in-app purchases now supported on the iPhone OS 3.0, Rock Band for iPhone will allow you buy new song packs directly from EA Mobile. How sweet is that?

[Update]
There’s no hard launch date set, but the game is going in for AppStore approval within a week. After that, it’s up to Apple to pull the trigger.

Keep reading for our sneak-peek video of the upcoming Rock Band iPhone game!

Rockband for iPhone sneak peek from IntoMobile on Vimeo.

Midomi, an online community for amateur singers and music identification service, will be extending into Android soon. Until now, Shazam...