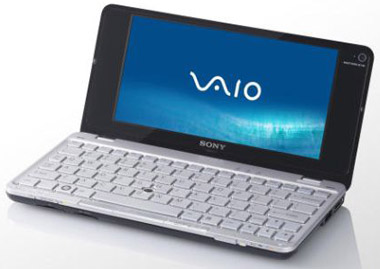 This isn’t the first time I’m writing in praise of Sony’s small and stylish Vaio P notebook/netbook. And I’m not doing so only to get the attention of Sony’s PR folks who by now should send me a single unit free of charge for all the publicity they got at IntoMobile. 🙂

I really, really like its form factor. The Vaio P is a super small laptop, yet it’s perfectly sized. The problem is in the software – Vista runs slowly on it and I also want the instant-on option on such a small computer. On that note, I’m hoping that Sony Ericsson could launch a similar product which would have pretty much everything the original Vaio P has, plus it would be capable for instant-on. In that sense, instead of using the Intel Atom CPU, that kind of a device should rely on some ARM-based processor like Qualcomm’s Snapdragon. Just imagine – you press a button and you can instantly start writing, browsing the web, playing music, video and so on. Instead of the Sony logo, the new device would wear Sony Ericsson’s colors, and that’s about it. Nothing too complicated – just use the winning form factor and if possible, make the device more affordable!

To be fair, there is some kind of instant-on function on the Sony Vaio P, but you can run only the limited number of applications. What I want to use the device is for writing and I can’t do that.

We’ve seen that Wistron’s smartbook prototype which is powered by Snapdragon and I like it. The problem, however, is that it’s not as portable as Sony Vaio P, and I’m not sure it has the so-much-needed (and so much repeated in the text above) instant-on capability.

I don’t care about the operating system. It could be Windows Mobile or something Linux-based (Android, Moblin, etc), whatever. I do care about the screen size – it should be able to display at least 1024 pixels in width (current Vaio P goes even further), and it should allow for WiFi connectivity. 3G is a plus, but not a must…

Am I asking for too much? It should be my portable writing device, which could also be used for Skype calls, web browsing, email, etc. Any thoughts?

In its efforts to conquer a portion of the ever-growing Indian mobile market, Samsung has launched three new low-cost handsets...