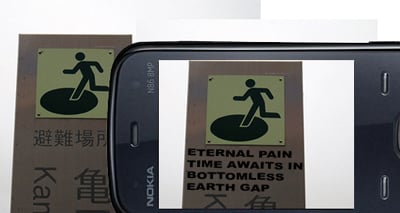 After getting a demo of some of the cool vector map capabilities on the N900 at CTIA, I prodded a Nokia rep about what they’ve been working on with augmented reality (since zooming down to street level on the map to check out the 3D rendering of a stadium was awfully close). He mentioned that there’s an project in alpha within Nokia that involves OCR character recognition that would effectively translate text seen through the camera into other languages. Sounds like a logical extension of Point and Find. Camera quality is a bottleneck, but now that phones are getting into the 8-12 megapixel range and optics are continually improving, picking up small text is becoming less of an issue. Given, this program will probably produce the garden variety hilarity of Google translations, it’s all you would need to get by in a foreign country.

And let’s face it: you know you’re living in the freaking future when you can point your phone at a bunch of alien characters and have them magically make sense. Combined with something like Sakhr’s voice translation software, one could be well-armed to handle some pretty exotic locales.

Ever wanted to use an iPhone for work, but got stuck with the standard issue BlackBerry? Well, Good Technology has...