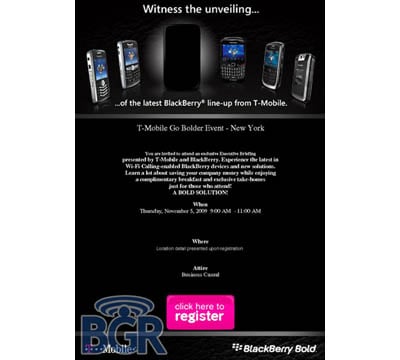 T-Mobile has begun sending out invites to a ‘Go Bolder’ event in NYC, to take place at a location not yet revealed (you find out upon registration) on November 5th… And also there’s word that a similar party will take place in Lost Angeles on November 3rd. With these launch parties going off early in the month, it’ll give celebs and tech-geeks a week or so to get captured on film, video and whatever else to help generate more buzz for the 9700. Although, I’m not sure it really needs any hoopla. The Bold 9000 was such a solid device for many, I have a feeling the 9700 will be flying off the shelves.

So here’s the time line as I understand it right now (at least for T-Mo): RIM to announce the device on the 21st. T-Mo to have a few launch parties in early November. Finally, the latest word I’ve received has the Bold 9700 going out for general consumption on November 11th (that’s a Wednesday). I would expect AT&T’s time line to follow a similar flow. Stay tuned for more.

This week in fake devices: 3 luxury brand ripoffs and robots

And we're continuing our fake device series. We have 4 handsets to present this week and they are: Lamborghini mobile...