If you thought the iPhone was the best smartphone you’ve ever used, you’re not alone. According to JD Power & Associates’ latest survey of 1,148 respondents, Apple’s iPhone is the most satisfying smartphone in both the consumer and enterprise segments (yet again). And, when it comes to featurephones (which don’t run mobile operating systems that can install and run third-party applications), LG takes top billing. The JD Power survey found that LG’s not-so-smartphones were the only handsets to earn satisfaction ratings above the industry average.

How did it all break down? While the iPhone scored perfectly in 5 out of 6 smartphone satisfaction categories, its ongoing lack of battery longevity earned it an abysmal score of 2/5 stars in the “Battery Function” category. Still, it was enough to trump both LG and RIM (BlackBerry) in the consumer smartphone segment, as well as RIM in the enterprise space. 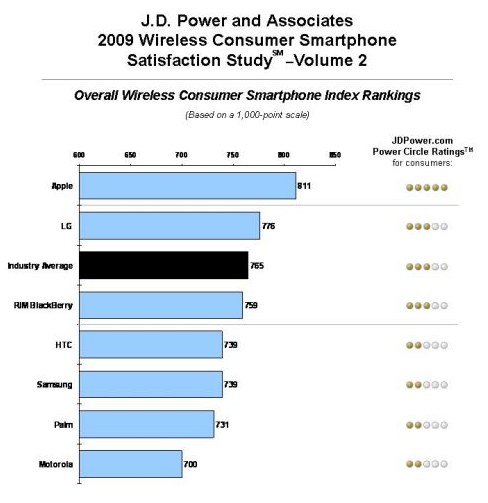 Apple’s iPhone has long been known to satisfy. But, with Android phone offering compelling designs and eye-catching UI’s from the likes of HTC and Motorola, we’re expecting to see the Apple’s lead in consumer satisfaction starting to close. We have to wonder what JD Power’s next survey will show.

If you're an avid video game nerd, such as myself, you might take a gander at the gameplay footage of...